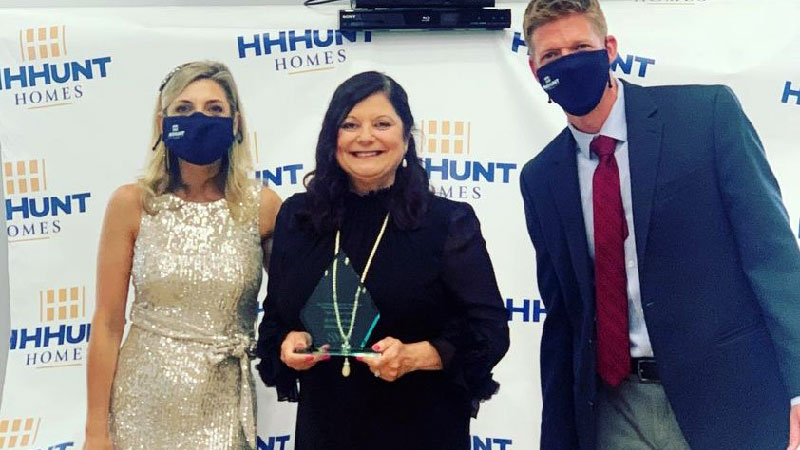 The Home Building Association of Richmond held their annual MAME (Major Achievements in Marketing Excellence) Awards ceremony on April 15, 2021. The MAME Awards recognize residential real estate products, services, and professionals that have enhanced the quality of life for homeowners and residents in the Greater Richmond region. Jill Crews, CMP, PCM, MIRM, Senior Vice-President of Marketing for HHHunt Corporation, and Jeri Copeland, New Home Advisor for HHHunt Homes, were both honored during the event.

Jill. Crews was named the 2020 Marketing Executive of the Year. Jill joined HHHunt in 1997 to manage the marketing efforts for two new residential communities the company was undertaking in Western Henrico County called Wyndham Forest and Twin Hickory. These two communities comprised of 2,652 homes, apartment communities, an office and shopping district, the Shady Grove YMCA, and over $50 million in homeowner amenities. In 2013, Jill was named Vice-President of Marketing for HHHunt Corporation. In this new role, she was responsible for the marketing efforts of all HHHunt’s business lines including apartment living, senior living, new homes, and master-planned communities. In 2020, Jill was promoted to Senior Vice-President of Marketing and oversees a team of ten professionals and all marketing efforts across HHHunt’s footprint which includes five states. She sits on HHHunt’s Leadership Committee and actively works with all the leaders from across the company’s various divisions. Jill is a collaborator and is always seeking new ways to help drive revenue for the company.

Jeri Copeland was named to the MAME Hall of Fame. This award is presented to new home sales advisors who have received consecutive Sales Volume Excellence Awards for 10 Years. Jeri has worked with HHHunt Homes since 2004 and has consistently been one of the division’s best agents. She is also a trusted mentor to her colleagues.